GTA 5 for years has maintained explosive popularity, and its online version has played a massive part in it. GTA 5 also features famous musicians with stylish cars, free roleplay gameplay, and countless other perks.

Music is one of the most important aspects of any series. It lays down an atmospheric tone for other players. Luckily for music lovers, many well-known musicians have collaborated with Rockstar games and appear inside the game, making it more entertaining, particularly for the fans.

If you are unaware of which musicians you are likely to come across in the popular game, then you are in the right spot. We will guide you about the five musicians and when they show up inside the game. 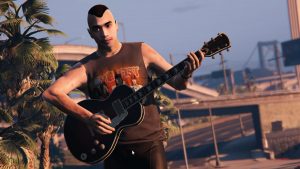 If you are into music, Dr. Dre is a name you must have heard quite a few times. Dre is a famous rap artist who has also achieved numerous industry awards. He was also a part N.W.A, which is one of the most popular rap groups. You will also find a lot of his songs being featured in GTA 5 and San Andreas.

If you have played the game but failed to notice, Dr. Dre had a small appearance in the Cayo Perico with Jimmy Iovine and DJ Pooh. He was on his way to enjoy a vacation on a private island before discovering that someone had stolen his car, which also had some unreleased music tracks.

Although technically, Jimmy Iovine isn’t a musician, he is a record executive and a producer, but his expertise is undeniable. Iovine, over his glorious career, has worked with popular names such as Eminem and Tupac Shakur, and he is also a co-founder of beats electronics

Jimmy Iovine also makes a cameo in GTA 5 along with Dr. Dre during the Cayo Perico events. Although Iovine doesn’t have much involvement in the series, one of the songs he produced, Edge of Seventeen by Stevie Nicks, is a part of GTA 4 under the Liberty rock radio station.

Popular for his work in The Strokes and the Voidz, Julian Casablancas is a famous name in the music industry. Casablancas isn’t complacent, provided his approach to innovation. However, a lot of his songs feature in GTA 5.

The Kult FM recently became a part of the Cayo Perico update, with Casablancas as the key host for the station. It primarily emphasizes experimental rock, though it experiments with different genres.

Moodymann is considered a legend, particularly in the underground scene.  He first appeared inside the Cayo Perico update, and you can find him in the Music Locker nearby the Diamond Resort and Casino.

Moodymann also regularly provides missions though he does develop a notorious reputation inside the community. Most GTA 5 online players don’t like dealing with a bad attitude and lack of appreciation. However, that does not stop him from featuring a lot of his favorite tracks in several mixes.

DJ Pooh is a popular rap artist originating from the West Coast. If you don’t know already, he has been a part of the series for a very long time as he was a writer for GTA San Andreas while also being a co-producer of the series. DJ Pooh was also responsible for bringing in Young Maylay, who was the voice artist of Carl Johnson.